Indigenous Peoples Day acknowledges the Original Peoples of Turtle Island–this land we now call North America–as well as Indigenous communities worldwide. It is a day to celebrate the wisdom and resilience of the many hundreds of Indigenous Nations who have inhabited these lands since time immemorial.

It is an opportunity to begin correcting a false historical narrative that dehumanizes and erases Indigenous Peoples in order to justify the theft and colonization of their homelands.

Indigenous Peoples Day provides an opportunity to center the voices of Indigenous people, whose sciences, cultures, and ways of life carry much needed wisdom on how to live sustainably in balanced relation with each other and the land.

The decades-long demand of Indigenous Nations for Indigenous Peoples Day was formally recognized by the UN Geneva Conference Declaration in 1977. The declaration resolved “to observe October 12, the day of so-called ‘discovery’ of America, as an International Day of Solidarity with the Indigenous Peoples of the Americas.”

How does Indigenous Peoples Day help our community?

It begins to remedy the harmful effects of racist, genocidal US policies and inaccurate histories that normalize colonization and white supremacy. These harmful effects include the erasure and negative stereotypes of Indigenous Peoples in media, education, and public consciousness, all of which directly impact the experiences of Indigenous people as well as everyone in our community.

Antiracism and teaching the truth benefit everyone because we can only experience our full humanity when we acknowledge the full humanity of all people.

Why replace Columbus Day? Why not celebrate both?

Columbus didn’t “discover” America. Indigenous Peoples have been here since time immemorial. Generations before colonization, Indigenous Peoples had diverse population centers and cross-continental trade routes as well as horticultural, medicinal, and scientific practices. Their place-based cultures and languages arose in kinship with their lands and each other. Indigenous people continue to resist colonization and carry on their cultural values.

Columbus was a merchant funded by Spain to find a trade route to India. When he landed on the densely populated island of present-day Haiti and the Dominican Republic, his actions initiated the genocide of the Arawak and Taino people. Acting within the framework of what later became known as the Doctrine of Discovery, he promulgated a culture that engaged in murder, land theft, rape, and enslavement. His legacy resulted in the devastating loss of Indigenous culture, ecosystems and biodiversity worldwide and led to our current environmental crisis.

Below is an excerpt one of his letters dated February 15, 1493: “I will also bring them as much aloes as they ask and as many slaves, who will be taken from the idolaters.”

We cannot celebrate both Indigenous Peoples Day and Columbus Day. Celebrating the myth of Columbus is an affront to Indigenous Nations because it glorifies the man who initiated the genocide of their people.

Indigenous Peoples Day is an opportunity to learn a more complete and truthful history.

Replacing Columbus Day with Indigenous Peoples Day is not anti-Italian; it is an anti-racist stand against the genocidal legacy of Columbus. Many Italian Americans choose to stand in solidarity with Indigenous people and values (Italian Americans for IPD). Somerville mayor Joe Curtatone, in writing about his town’s decision to celebrate Indigenous Peoples Day, said, “Columbus Day is a relic of an outdated and oversimplified version of history… As an Italian-American, it feels good that there is a holiday that is nominally about us… Yet the specifics of this holiday run so deep into human suffering that we need to shift our pride elsewhere.”

What about Native American Heritage Day?

Native American Heritage Day is a civil holiday on the Friday after Thanksgiving. It was declared in 2009, despite the fact that Indigenous people had been calling for Indigenous Peoples Day to replace Columbus Day for more than 30 years.

Native American Heritage Day is not widely embraced by Indigenous people because of its association with Thanksgiving, observed by many Indigenous communities as a Day of Mourning, and because Black Friday is the antithesis of sustainability. It also does not address the harm of continuing to celebrate Columbus.

Where else is Indigenous Peoples Day celebrated?

Berkeley, CA was the first town to adopt Indigenous Peoples Day in 1992. Today, Indigenous Peoples Day is officially celebrated in lieu of Columbus Day in 14 states and the District of Columbia, as well as in more than 130 cities, including Amherst, Arlington, Brookline, Cambridge, Great Barrington, Marblehead, Mashpee, Melrose, Newton, Northampton, Pittsfield, Provincetown, Salem and Somerville. 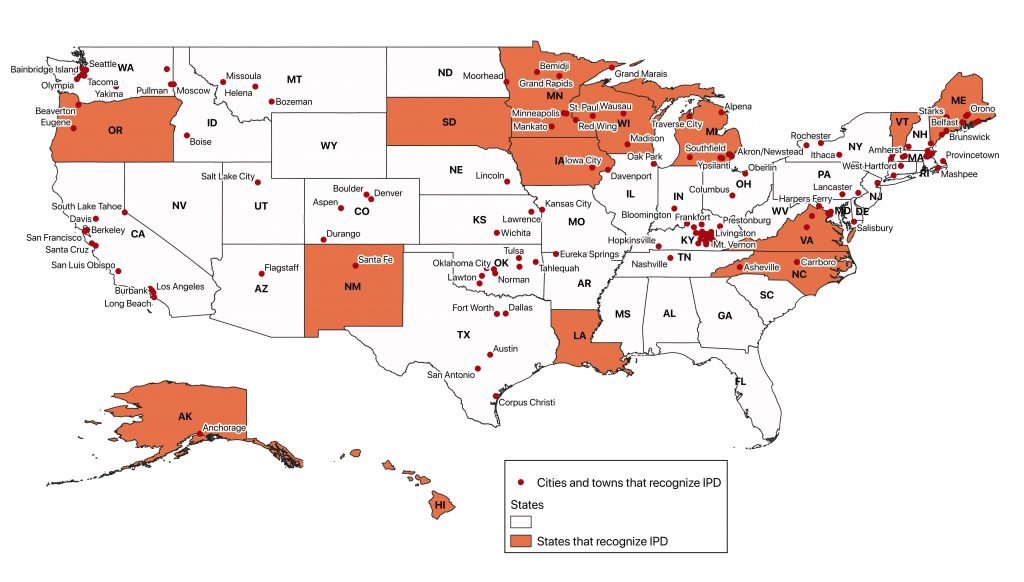 What will it mean if this ballot measure passes in Wellesley?

Question 1 is a non-binding ballot measure. It has the power to demonstrate our community’s support for honoring Indigenous Peoples Day instead of Columbus Day and to encourage the Wellesley Select Board to make this change official.

If the Select Board makes this change, our town will officially recognize Indigenous Peoples Day on the second Monday of October. This will be reflected on the town’s calendars and websites, and it will still be a three day weekend. Columbus Day will continue to be a federal and Massachusetts state holiday.

We as people who reside, work, and engage in Wellesley acknowledge this town is located on the traditional territory of the Massachusett and Nipmuc Tribes. Learn more about Native Land.